When we bought the house, our dining room was covered in a lovely floral wallflower that featured pink roses, a metallic background and honeybees.  It perfectly matched the custom window treatments and plush green carpet.   If I had a time machine to go back to the 60’s, I probably would have loved it.  However, since it was now 2016, it had to go.  After some trial and error, we realized the wallpaper had now become part of the house and we’d save ourselves a lot of heartache if we just painted over it rather than trying to remove it.  So that’s what we did.  A coat of Kilz not only covered the flowers, but it also helped to encapsulate the funkiness that filled the house due to years of neglect.  From there, it was a piece of cake.  Fresh paint on the walls and ceiling, new flooring and shazam!  We had a new dining room!  We removed the absolutely GORGEOUS crystal chandelier to use in our bedroom and replaced it with a more rustic wrought iron one. 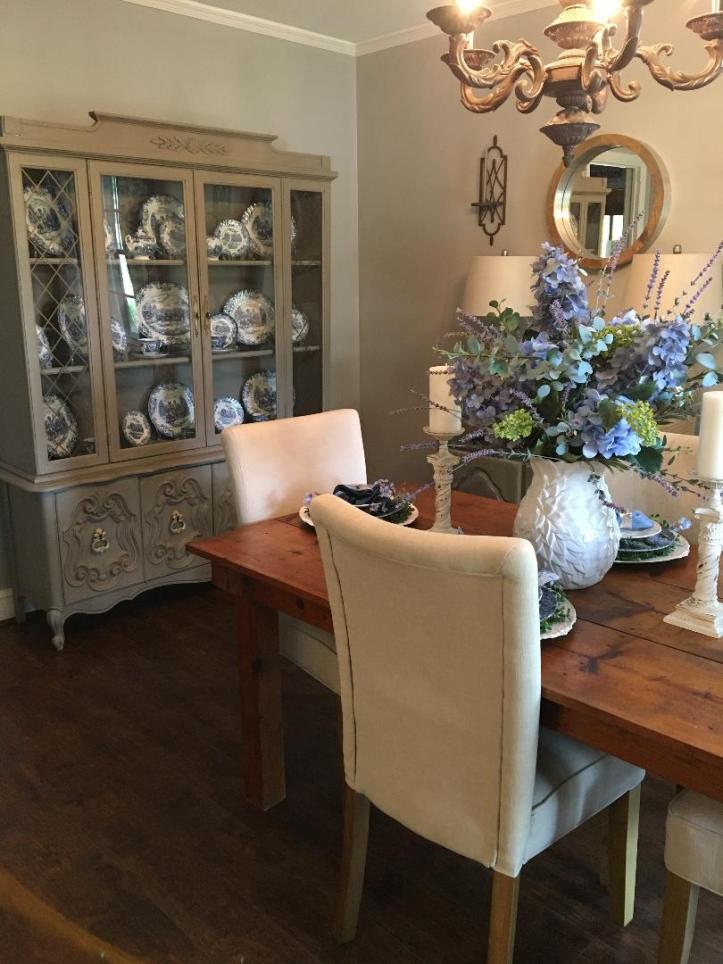 Summertime blues transformed this room from drab to fab!  Faux blue hydrangeas pair perfectly with my Johnson Brothers china.  The small cabinet was a Goodwill pick several years ago.  Originally, it had been an entertainment center, but weT removed the doors and added shelving.  I painted it with ASCP in French Linen and did a dry rub technique with stain to age it a bit.

The chandelier and small pine farm table came from consignment stores, and the large china cabinet was a $40 garage pick.  Painted in ASCP French Linen to match the smaller cabinet.  The chairs were a splurge which we purchased brand new (but on sale!) from Steinmart.

The teak trimmed round mirror was a steal for $11 at our local Goodwill, and the wrought iron sconce’s were a marketplace find, but fit perfectly with our other décor!  The server had been part of my formal dining room set and was originally done in a shiny cherry finish.  It was painted using the same technique as the small china cabinet.  I scored the mercury glass lamps on clearance at Ross.  It’s amazing how small changes can completely transform a room without blowing the budget! 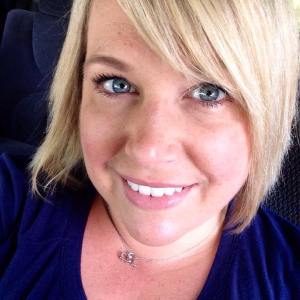 Welcome to my blog!  In June of 2018, I turned my hobby of repurposing furniture and “picking” at thrift stores into a small business.  I specialize in one-of-a-kind, hand-painted furniture and unique décor.  Have a look around and hopefully you’ll be inspired to change up things in your home too!